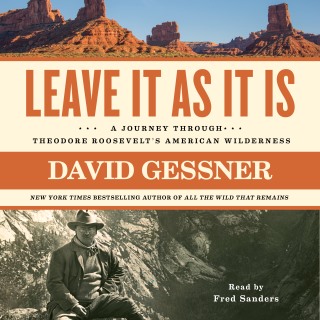 Leave It As It Is

“A rallying cry in the age of climate change.” —Robert Redford

“Leave it as it is,” Theodore Roosevelt announced while viewing the Grand Canyon for the first time. “The ages have been at work on it and man can only mar it.” Roosevelt’s rallying cry signaled the beginning of an environmental fight that still wages today. To reconnect with the American wilderness and with the president who courageously protected it, acclaimed nature writer and New York Times bestselling author David Gessner embarks on a great American road trip guided by Roosevelt’s crusading environmental legacy.

Gessner travels to the Dakota badlands where Roosevelt awakened as a naturalist; to Yellowstone, Yosemite and the Grand Canyon where Roosevelt escaped during the grind of his reelection tour; and finally, to Bears Ears, Utah, a monument proposed by Native Tribes that is embroiled in a national conservation fight. Along the way, Gessner questions and reimagines Roosevelt’s vision for today.

As Gessner journeys through the grandeur of our public lands, he tells the story of Roosevelt’s life as a pioneering conservationist, offering an arresting history, a powerful call to arms, and a profound meditation on our environmental future.

David Gessner: David Gessner is the author of ten books, including the New York Times bestseller All the Wild That Remains. He has taught environmental writing as a Briggs-Copeland Lecturer at Harvard and is currently a professor and department chair at the University of North Carolina at Wilmington, where he founded the award-winning literary journal Ecotone. Gessner lives in Wilmington, North Carolina.